in the Netherlands. Most of them came to the Netherlands in the early 60's as political refugees. In addition, there are Papuans living in diaspora in other places: in Sweden, Greece, England, the United States, Australia, and several areas in Oceania (Fiji, Vanuatu, Solomon Islands).
Previously Papuans also resided in Surinam and Senegal. The largest group of refugees outside Papua itself is living in Papua New Guinea (15,000). The Indonesian province of Papua has a current population of about 2,8 million people, of whom 55 percent are of Papuan descent.

The Netherlands, as a former colonial power, has the responsibility of making the heritage as accessible as possible to all interested parties in the Netherlands, Papua and elsewhere, especially since in the last decades of the 20th century much of the heritage in Papua itself has been lost. Papuans often refer to their territory as having no history. Information from before 1962 in particular can hardly be found in Papua. Many cultural artifacts, photo's and written documentation about the Papuans was taken to the Netherlands both during the active colonial period ('49-'62) and at the end when the Dutch had to leave West New Guinea because it was handed over to Indonesia. In addition, the Indonesians have taken collections to Java as wel as other places in Indonesia. The Papua families, who had to flee in the 60's, also took various forms of heritage with them, especially pieces from their own family. The collections in the Netherlands are therefore not only comprehensive but also unique.

In Papua, the demand for knowledge about this heritage has increased in recent years. Due to the 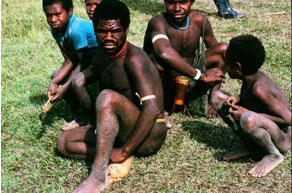 installation of regional autonomy in Papua by Indonesia, more room has been created for meeting this demand. This applies to education but also to the growing civil society in Papua. More attention and greater appreciation for their heritage generates more respect for Papua Cultures and draws attention to the intrinsic value of this heritage. From a social viewpoint, this respect is increasingly important because Papua Cultures are under threat. They have been culturally overwhelmed due to economic and technological developments, the Indonesian transmigration policy and Bahasa Indonesia becoming the lingua franca. Papuan indegenous languages are fast disappearing and so are many of the cultural concepts and rituals that form an intregal part of any language.

The demand for knowledge and cultural exchange is growing within the Dutch Papua Community, partly because it now consists of three generations with a fourth coming. So making heritage more accessible and actively sharing with the Papua Community in the Netherlands and those in diaspora is of great importance.  The increasing interest for Papua heritage is also evident in a wider context. The huge success (in numbers of visitors and media attention) of the 2008 Bisj Pole exhibition at the Tropenmuseum, is a good example of this. The international success of artists such as Roy Villevoye and Fiona Tan, who have Papua as the focus of their work or have it as the source of their visual art, is a further example of recent interest.