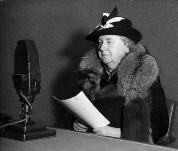 At the beginning of WWII, Queen Wilhelmina in London and the illegal news paper ‘Het Parool’ argued that all NSB members ( Nationalistic Socialist Bond)  should be deported to Borneo, Suriname or New Guinea.   Once in the colonies, these collaborators were to be sentenced to forced labour. This perception changed towards the end of the war.  On 29 January 1944, Minister Jaap Burger from Internal Affairs called for the NSB members to be detained pending an official  trial.  A year later Burger resigned after a conflict with Prime Minister Pieter Gerbrandy about the judiciary process of the

traitors and collaborators. Immediately after the liberation, almost 200.000 Dutch citizens were interned in camps and prisons and put on trial. About 250 of them, known as the ‘tribunal cases’, were given a second chance and were sent to New Guinea where they had to dismantle American bases and clean up equipment left behind at the end of World War II.

1. Collaborators to internment camps
2. Recruitment of ‘Tribunal Cases’
3. The first to depart
4. Merchants at Port Said
5. To Biak instead of Hollandia
6. Collaborator makes pass at Papuan woman
7. Two more groups off to New Guinea
8. Collaborators in the East Indies
9. Links
10. Sources 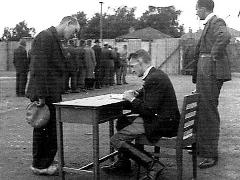 During the war and at the end of World War II, suspected collaborators were arrested and taken to camps in Vught, Westerbork and Scheveningen. At the military rifle range on the Veluwe, a special camp was set up for about 4000 Dutchmen who had served in the German SS or had joined the NSB. According to doctor Loe de Jong from the NIOD (National Institute for Archives and Documentation), there were about 200 internment camps half way through1945 and by the end of that year, there were still 130 camps left. To reduce arbitrary and unlawful procedures to a minimum, the Dutch Government based in London at that time, decided to put special courts into place for those who were suspected of having worked for the Germans. ‘Minor offenders’ regained their freedom relatively quickly because of the rather generous policy of granting pardon. Five years after liberation, around 140.000 people were let go and 66.000 were actually sentenced. Furthermore, it was estimated that 15 to 20.000 people temporarily lost their Dutch citizenship. 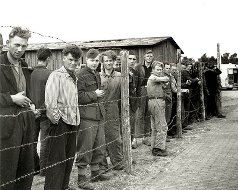 In February 1947, the Ministry of External Affairs planned to send a number of collaborators to New Guinea.  They wanted to recruit a group of 200 minor offenders from among those in the camps (Minor offenders were sentenced by special tribunals, while serious traitors had to go on trial at the High Court).Those who elected to go, were to get conditional freedom, reasonable financial retribution and would escape the horrors of the camps, so they were told. Many of the collaborators were rather suspicious of the deal as they were used to agreements and promises not being followed through. After a thorough medical check and a selection procedure for physical strength, a group of 119 individuals was selected, one of whom 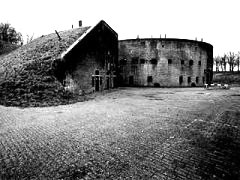 was a doctor. They were temporarily interned at Fort Honswijk in the province of Utrecht. The STPD, an organization in charge of collaborators, chartered a freighter from the Dutch Steamship Company at the end of April and one month later the group, accompanied by police, was transported to Amsterdam harbour.  There was a resounding applause when the official passes for their conditional release were distributed. J.C.Woestnenburg, the secretary of the STPD, was in charge of the group and a number of soldiers accompanied them for security reasons. The collaborators were not permitted to leave the ship at ports of call and their alcohol intake was restricted to one bottle of beer a day.

3. The first to depart 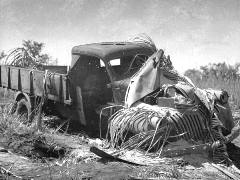 On 28 April 1947, the freighter ‘Tarakan’ leaft for New Guinea with 119 men aboard. All were collaborators  who had signed a contract to clean up equipment left behind in the Dutch Colony after WWII. The material loss of the Americans in South East Asia was much less than expected. As a result, large depots with planes, vehicles, spare parts, clothing and food were left behind in the whole of this region in 1945. In New Guinea there was also a lot of equipment left over from the war. Near Hollandia and on the island of Biak, 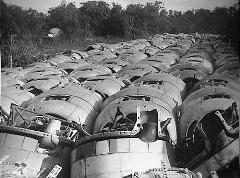 large Allied bases had been constructed  during the war and the Americans were now offering all the goods to the Dutch for next to nothing. This was gratefully accepted because just about everything was in short supply and the Netherlands were about to wage a war in the colonies. Initially, the Japanese Prisoners of War(POWs) had the job of sorting out all the equipment but when the Allies decided to sent them home in the course of 1946, there was a shortage of manpower. 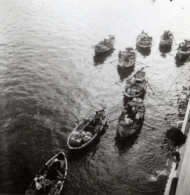 Boredom was a real problem during the long journey and a stay at Port Said, at the mouth of the Suez canal in Egypt, was a welcome relief. The men could not believe their eyes when they saw merchants climbing on board. Anything and everything was for sale and the merchants also changed money, brought in liquor and sold pornographic material and drugs.

Shortly afterwards, the ‘Tarakan’ sailed down the 163km long Suez Canal between the Mediterranean and the Red Sea. Loud cheers went up when the 'Tarakan' passed the ‘Johan de Wit’ which was transporting troops. One of the collaborators, who kept a diary, wrote:
“Do they know we are NSB members? Or do they interpret our khaki-clad figures as belonging to the military?”
The group on board passed the time as best they could with games and English lessons in order to avoid total boredom. The Neptune Festival to celebrate crossing the equator, which could have been a welcome break, turned out to be a rather painful moment. The crew, the  security men and the handful of other passengers  on board refused to celebrate this event with the collaborators.

5. To Biak, instead of Hollandia 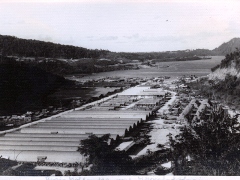 On 28 June, the ‘Tarakan’ arrived in the Tandjong Priok Harbour to the north of Batavia (now Djakarta), where a rather luke-warm welcome awaited them. A colonial paper reported:
” It is obvious that the decent citizens of Hollandia are not keen to give these people the freedom of movement that was granted as part of the deal back in the Netherlands.” Woestenburg realised that the information from the Netherlands was totally inadequate and disagreement arose between himself and the Attorney-General. the project expected to lead to serious opposition from the community in Hollandia and the whole operation was shifted to Biak, where there was also an American base that needed to be dismantled. When the collaborators disembarked, they looked around in dismay. Nothing had been organised and there was no proper accommodation for them. The newcomers ended up in two inadequate barracks which had been used for Japanese POWs. It was a disappointment but they managed to adapt, despite the incessant tropical rain which simply would not let up. 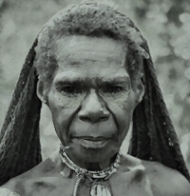 Many of the military present on Biak had difficulty with the arrival of the NSB members who collaborated with the enemy. The misleading radio report about the 200 guilders a month that was to be paid to these traitors, did not go down at all well.
The truth however is that each person received pocket money  of 30 guilders per month, as well as his daily requirements, clothing and medical care. Apart from this, the family back home received a basic benefit to live on.

At the end of January 1948, unrest is caused by one of the collaborators when he makes a pass at a Papuan woman or as a local paper puts it: “when he tries to imitate one of the facets of marriage”. The man is seriously wounded when he gets hit with a parang (a machete) by a family member who is defending the woman’s honour. As a result, the military commander puts an evening curfew in place. The offender, along with some other troublemakers, is sent back to the Netherlands. Order is restored after imposing forced labour as a disciplinary measure.  The individuals concerned have to drill wholes and dig trenches for drainage, heavy work usually done by ‘koelies’ (unskilled indigenous labourers). One of the collaborators commits suicide and is then buried by his mates at the local Biak cemetery for Europeans. 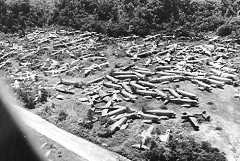 In the Spring of 1948, a second group of 99 people went off to Hollandia. On arrival, they were immediately confronted by the irreconcilable attitude of the European community. In great haste, the worried citizens called a meeting to discuss what stance they should take towards the impostors.  The overall majority decided that these people were to be shunned.  With minor harassments they showed the collaborators their so called ‘patriotic’ side.
In July 1948, the third rather small group of 29 people arrived in New Guinea. In the following year, most of the men returned home with a written reference and a good sum of money saved up.  Of the 247 men that were held prisoner, 33 decided to stay in New Guinea. The STPD rapported that the men put in a more than satisfactory effort. The STPD Foundation was annulled in 1951 and its archives sent to the Ministry of Justice.

8. Collaborators in the Dutch East Indies 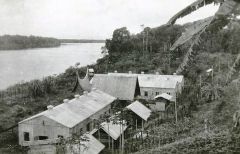 The NSB branch (Nationalistic Socialist Bond) that arose in the East Indies initially wanted to hang on to the colony for the Netherlands and in 1937 it consited of around 5000 members. Quite a number of Eurasians were also a member of the NSB. However, this NSB branch lost many of its members during the 1930's once it had become clear that it was focussing on racial purity. In April 1940 the government in the Netherlands announced that all German, Dutch and Austrian NSB members were to be interned in camps. More than 2500 people, 500 of whom were Dutch, were arrested because they were thought to sympathise with Nazi Germany.  A diverse group of 146 NSB members,  regarded  as being ‘the most dangerous to the state’, were  transported from Java to Suriname in  January of 1942 on the Tjsidane, one of the ships belonging to the Java-China-Japanese Line. After a short stay in Fort Zeelandia,the men ended up in Jodensavanne, an old plantation along the Suriname River that had been converted to a concentration camp. They were treated very badly at this camp. On 15 July 1946, 138 men returned to the Netherlands. These men and their family were subsequently left to their own devices. Many of them were wrongly charged of being traitors and collaborators. For them there was to be  no justice, no reinstating of their honour and the whole issue was kept right out of the media.