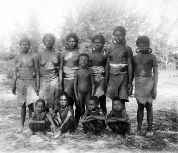 The North New Guinea Expedition in 1903 was the first official Dutch expedition into New Guinea and its goal was to explore the North Coast of the Dutch part of the island and explore whether exploitable coal beds were present. The exploration concentrated on the Geelvink Bay and Humboldt Bay areas, and also included Lake Sentani. The leader of the expedition was the German Geologist Arthur Wichmann, founder of Earth Sciences at the University of Utrecht.

The expressed wish of the Dutch Government was to manage the entire Indonesian Archipelago and to fill in the so called ‘white spots’ on the map. Around 1900 this intention led to setting up various administrative posts: FakFak in 1894, Manokwari in 1898, Merauke in 1902 and Hollandia in 1910.

Content:
1.The scientific team of 1903
2.Captain of the ship and amateur geologist
3.Wichmann a professor at 18.
4.Academic and adventurous
5.Exploration with expedition ship ‘Zeemeeuw’
6.Expedition well-documented
7.No bracelets for Van der Sande
8.Lorentz a diplomat after three expeditions
9.Sources 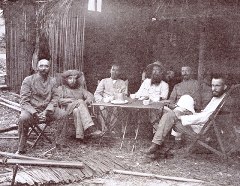 Promoting  Research of the Physical Environment in the Dutch Colonies, also known as Treub &Co.  Apart from expedition leader Wichmann, the team consisted of: Hendrikus Albertus Lorentz (who was to lead two other expeditions later on), the army physician Gijsbertus Adrian Johan van der Sande (Knight of the Military Order of William), who was to be responsible for Anthropology and Ethnography, the Zoologist Lieven Ferdinand de Beaufort, and ex-dealer of Paradise feathers Johannes Maximiliaan Duma, who was familiar with 'life in the jungle' .  On the advice of Dumas, the expedition took 30 Dajak people along from North Borneo(to take on funtions such as rower, porter, field scout and handyman), as well as two hunters and seven others as assistants. Lorentz was the son of an ex tobacco planter from East Java, who had returned to the Netherlands. He met Wichmann in Utrecht, where he was studying  Law and Biology.

2.Captain of the ship and amateur Geologist


Jan Willem van Nouhuys, the captain of the Navy Ship ‘Zeeleeuw’ that took the members of the 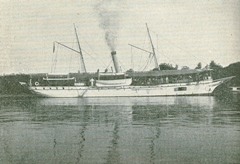 expedition to New Guinea, was not officially part of the team. He was amateur geologist and ethnographer and was regarded as one of the researchers. Van Nouhuys followed in his father’s footsteps. His father had been a captain on a merchant ship. In 1895 Jan Willem van Nouhuys became a mate in the Dutch Navy in the East Indies and in 1901 he was promoted and became a captain, just like his father.  Van Nouhuys, on request of the then expedition leader Lorentz, took part in two other expeditions  in New Guinea, both to the eternal snowline in the central highlands of New Guinea. These were: The First South New Guinea Expedition in 1907 and the Second New Guinea Expedition in 1909. However, the snowline was not reached until the second expedition: Van Nouhuys and Lorentz become the first ever to set foot on ‘ snow in the tropics’ of New Guinea. 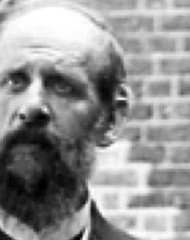 Geosciences) for 43 years. In March 1879, at the age of 18, he had accepted this position after his inaugural address held in German at the Pieterskerk (church) in Utrecht.
Arthur Wichmann was born in Hamburg on 9 April 1851. His father, Ernst Henrich Weichmann, was a descendent of the whalers from Glückstadt on the  Elbe near Hamburg. Arthur studied in the German city of Leipzig. He became interested in mineralogy and geology because of the influence of his main teacher, Oberbergnat Ferdinand Zirkel, under whom he graduated after a study of three years. Wichmann was a very productive scientist. He actually published works all his life: from his student days right up until his death. The bibliography of Wichmann contains 123 publications which were published over a 54 year period, most of them in German. His writing is mainly about geological matters, but there are also historical and geographical works, notably his magnum opus 'Nova Guinea' on his expedition in 1903. In 1921 the seventy-year-old scientist returned to his native Hamburg, where he died in 1927.

In 1901 army physician Gijsbrecht van der Sande returned from the Aceh War in one piece. He was 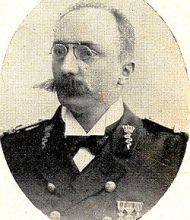 knighted for his contribution to this war within the Dutch Colonies, being waged against Aceh pirates to secure shipping in the strait of Malacca. On his return to Europe, he studied to become proficient in photography and physical anthropology. He learnt the intricacies of skull measuring in Zurich, Switzerland from the well-known anthropological expert Rudolf Martin. This training is paid for by Treub & Co in preparation for the expedition that they were funding. The seven-month-long expedition provided Van der Sande with all he hoped for: A combination of an academic, yet adventurous expedition. As was the case in Acheh, he also ended up with war injuries in

New Guinea. But this time he had to remove arrow heads  rather than bullets. During this expedition Van der Sande was absolutely in his element and he was always in a good mood, something which the other members of the expedition really appreciated. Staying in a good mood was sorely tested at times. On some days in New Guinea, the jungle was flooded and the researchers had to climb onto floating logs or had to wade through the mud right up to their middle or higher. Van der Sande was not perturbed by this, not even when he went under twice on one day because he had slipped off a log. He remained chivalrous and helpful in difficult circumstances throughout the journey. 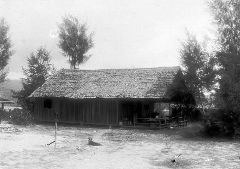 Humboldt Bay further east and lake Sentani. A new house, built on the island Metu Debi in Jautefa Bay (near the villages of Tobbati and Enggros), became the base for making trips along the coast, interspersed with several hikes to explore the hinterland. Doctor Van der Sande held his clinic at the newly built house on Metu Debis and in a tent when he was out on a hike.
Lake Sentani was explored using the ‘Zeemeeuw’ rescue boat, which was carried across to the lake on the shoulders of a group of porters. In his report Wichmann wrote: “After every trip, the deck of the expedition ship changes into an improvised laboratory full of stones, bottles and test tubes with alcohol, and numerous ethnographic objects which were to be packed into trunks".

The 1903 expedition was well-documented. Almost every expedition member made a contribution: 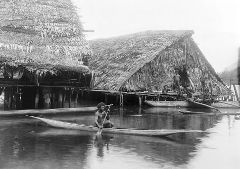 Lorentz with a well written travelogue for the interested layman; Wichmann with his general scientific report "Entdeckungsgeschichte von New-Guinea '(Nova Guinea 1 and 2); Van der Sande with a study of culture and physical characteristics of the Papuans; and De Beaufort with descriptions of the birds which were collected and prepared during this expedition. Van der Sande, being a photographer, a physical anthropologist as well as an ethnographer, made a photo journal of this expedition, collected ethnographic artefacts, observed cultural customs as best he could, and made measurements of the physical characteristics of Papuans along the coast. In fact, Van der Sande made a good job of everything he was hired in for. Apart from being a researcher, he was also a doctor and he provided medical care to the researches on the team and any Papuans that he came into contact with. He had taken along a fully equipped doctor’s kit, medicine and even an operating table.


7. No bracelets for Van der Sande


Working as a doctor meant that Van der Sande camr into close contact with the indigenous population. 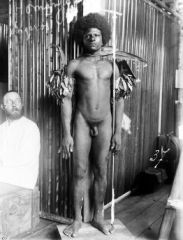 This was an excellent starting point for collecting ethnographic material. Not only did he have an eye for aesthetics, he also collected in a systematic way.  In principle, any artefact was regarded as a collector’s item but he could not always collect everything he wanted to because Papuans were not always prepared to part with the item he had cast his eye on. Even though he had a range of articles for bartering, such as tobacco, beads, knives, steel axes and even mouth organs, Van der Sande was not able to obtain the highly valued bracelets made of glass. Even his bid of 30 or more axes was refused.  He did record his findings in a 400 page port folio full of photos and coloured lithographs. The entire 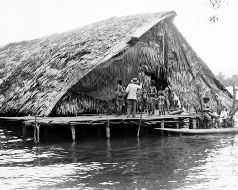 collection of more than 900 artefacts was transported to Europe, where it was then described and classified.  Later on, at least one third was returned to the Dutch East Indies. These items were housed in the Museum of the Batavian Society, now the Museum Nasional Indonesia. The rest of the collection is permanently kept in the ‘Rijksmuseum voor Volkenkunde’ (National Ethnographic Museum) in Leiden, the Netherlands. In 1907 a special exhibition of the ethnographic collection from the North New Guinea Expedition was staged in the then Ethnographic Museum in Leiden.
Van der Sande died unexpectedly in 1910 at the age of 47.


8.Lorentz a diplomat after three expeditions


Because of his family history and his own 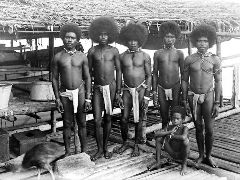 extensive network of personal contacts, Hendrik Lorentz becam fascinated with the 'terra incognita' in New Guinea. He published a well written and entertaining account of the 1903 expedition, suitable for a wide audience. After three journeys in New Guinea, he entered the diplomatic service. He was posted to Copenhagen for quite some time, and was then appointed as the Vice-Consul of Cape Town, South Africa. In 1923 he was promoted to Consul-General in Pretoria. Lorentz was involved with trade between the Netherlands and South Africa and provided support to the many Dutch immigrants who settled there in vast numbers in those years. After he retired in 1937, Lorentz and his wife and their children lived on a farm in Klerksdorp, where he remained until his death. 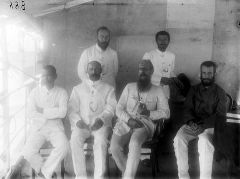 One of the many rivers in the mountains of the central highlands in New Guinea was named after Lorentz but this was changed after the handover to Indonesia, as were many names that referred to the Dutch Colonial period. However, the Lorentz National Park does still bear his name. Today it is called Taman National Lorentz and since 1999 it has been listed as one of the World Heritage sites of Unesco.


The zoologist of the expedition, De Beaufort, also advanced his career after the exploration in New Guinea.  In the 1920’s he was appointed as the director of Artis, the zoological gardens in Amsterdam and later he became a professor at Amsterdam University.