In the early 20th Century, Dutch authority in the western half of New Guinea is negligible and superficially established in areas located along the coast. The government consultant for overseas areas in the Dutch East Indies, Hendrik Colijn, who  became Prime Minister of the Netherlands in August 1925, presents a plan in 1906 for military detachments to start exploring the  interior of Dutch New Guinea.

These political activities of the Netherlands ensure that this territory does not gradually fall into the hands of other colonisers. The exploration is to focus primarily on gathering data on topography, navigability of rivers and soil composition. In addition, it is the intention to find out more about the culture and lifestyle of

the inhabitants in order to enhance Dutch authority on the island. Colijn convinces Johannes Benedictus van Heutz ,the Govenor General of the East Indies from 1905 to 1909, to start exploring New Guinea using the military.  Simultaneously, three scientific expeditions are initiated in the Netherlands by various institutions, some of which have commercial interests as an objective. They strive to start out from the south coast and to eventually reach the ‘eternal snow’ on the peaks of the Central Plateau.

1.Commanding administrator has no power

The administrative posts at the time were usually commanded by an Indonesian administrator. This commander has a number of indigenous, armed policemen at his deposal and in some cases he has a small yacht to use for reconnaissance. 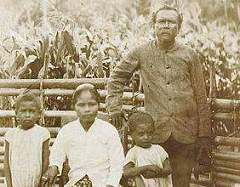 Any real power is in fact very limited with such basic resorting for an extensive area such as (Former) Dutch New Guinea. So the military have to explore and map the large and then virtually unknown interior of the island. Three detachments are established from the Koninklijke Nederlands Indische Leger or KNIL for short (- Royal Netherlands East Indies Army- as it was called at that time), for exploring the southern, western and northern regions of New Guinea between 1907 to 1915.

guises. These detachments put some 300.000 square kilometres of previously unknown territory onto the map. They start from Merauke on the south coast. The exploratory expeditions are rounded off on the north coast in 1915, in the catchment area of the Maberamo River. The KNIL detachments are regularly confronted with a hostile attitude of the population and the ever extreme conditions of the terrain, ranging from almost impenetrable swamps to very nigh inaccessible mountain ranges. At the direction of the Military Defence Department in the Dutch East Indies, all obtained ethnographic object are to be transferred to the Museum of the Royal Batavian Society of Arts and Sciences in Batavia, now the Museum Nasional Indonesia in Jakarta. However, a large quantity of items collected in the south is shipped off to the Netherlands instead. 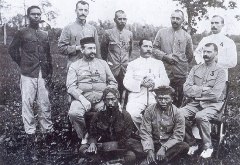 The Southern Detachment starts its first expedition in 1907. The commander and expedition leader is Captain A.J. Gooszen and Captain J.H.Daam is the second in command. They are jointly responsible for the cartographic and astronomical measurements.  Doctor B. Branderhorst, the medical officer who looks after the health of the expedition team,  also conducts  ethnographic and botanical research. Geological investigation is undertaken by Ottho Gerhard Heldring, a mining engineer. Naturalist John Maximilian Dumas accompanies the group because of his previous experience as a successful participant in the Northern New Guinea Expedition of 1903 led by Arthur Wichmann. At the helm of the expedition vessel 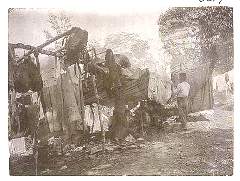 "The Swallow" is first mate GMA Elber of the National Marine. Other members of the expedition  are:  80 soldiers and as many convicts who are to perform heavy manual labour, a number of Malay topographers, a zoologist and a botanist, both of whom are Javanese.  Also available is R.L.A. Hellwig, the Assistant District Resident of Merauke, for any necessary support and advice.

Each expedition uses a set procedure to explore a region: sailing  down the river as far as possible, setting up a base camp, continuing on foot deeper inland. The town of Merauke  on the south coast is the  Detachment’s basic reference point from 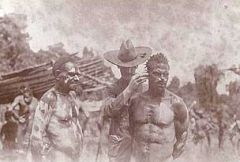 which the huge marshy river area to the west needs to be covered. Especially the military expeditions of the Southern  Detachment have become well known. This is  due to a series of newspaper articles written by  commander Gooszen, under the pseudonym "Pioneer", to keep the Home Front informed of his experiences.  The daily marches inland are arduous, the temperatures high, varying between 34 and 37 ° C, and the biggest concern is always to find fresh drinking water for the men and the porters. The Southern Detachment finally clears the job in 1913, after six years of exploration work.    Of the first to

participate, few remain shortly after commencing in 1907 and they need to bring in new men in order to keep the operation going. Despite his glowing reports, Gooszen does not last more than a year, exhausted by several malaria attacks. Daam, his fellow commander, with whom Gooszen was  responsibility for gathering cartographic data, also gives up. Branderhorst, the army doctor in charge of ethnological and botanical research, gives it away in 1910, as does geologist Heldring.  The naturalist Dumas has the greatest stamina. He stays with the expedition for a good four of the six years that it takes to complete the explorations undertaken by the military.

In 1909 the Northern Detachment, led by Captain F.J.P. Sache starts on the exploration around Humboldt Bay, strategically situated on the boundary of the Duitse Keizer Willemsland (German occupied territory)to the east. The Detachment’s base camp is called ‘Hollandia’ to distinguish itself clearly from ‘Germania-Hoek’ (‘German Corner’) on the other side of the border. The following year, 1910, Hollandia is pronounced the capital of Dutch New Guinea. The boundary between the Dutch and the German territory is located as being on longitude 141 and a special commission is set up to define the boundaries. To do this, they have to take both natural boundaries and existing population groups into account. The northern detachment  starts  off 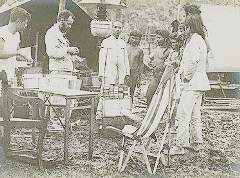 by searching for suitable natural boundaries. The coast is explored in great detail and a number of  trips are made inland, including to Lake Sentani. A  patrol group, including members of the special Boundary Commission, takes off to the mouth of the Sipik River which is situated in the German held territory.  They sail more than 800 kilometre westwards up the river until they reach a point where the river backs on to itself for quite a distance, and this becomes the boundary between the German and Dutch territories. A beautiful collection of more than 300 artefacts from the Sipik is a tangible souvenir of the work done by the Boundary Commission. This collection was built up by the Danish Health officer Knud Gjellerup, who sends it to the Museum of the Batavian Society in Batavia. The advice of the Boundary Commission is never acted upon because the German territory in this area goes to the Brittish after World War I.

In 1910 Captain K.F.Koch, in charge of the Western Detachment, starts to explore 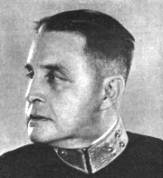 the Omba River. His unit consists mainly of military police who have been based in the Fak-Fak administrative post since 1907. This post is used as the base from which they go out on reconnaissance trips. The coastal and inland areas of the Vogelkop, as well as the peninsula  to the south, are thoroughly explored and mapped. Especially for this exploration, canoes are purchased from the Kei Islands.  As with the Northern Detachment, there is no-one who keeps a journal or reports to inform the public about these explorations. However, in 1912 the Detachment is transferred to Manokwari and the Dutch KNIL officer and writer Willem Karel Hendrik becomes the commander for the exploration of the Schouten Islands. He writes a series of articles on the German aspirations for New Guinea in the ‘Locomotief’, a Semarang news paper on Java. The extensive reconnaissance of the Geelvinkbaai is also finalised in 1912. 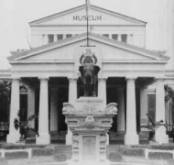 For the Government of the Dutch East Indies, the museum of the Batavian Society is the preferred partner for managing the ethnographic artefacts that have been collected. This society functions as a semi-government agency and is considered a suitable institution with which to store the art objects and other ethnographic artefacts. However, not all the artefacts reach Batavia.  Something goes wrong with the material collected in the West New Guinea. According to official sources: “ Of the ethnographic artefacts  collected  in the western part of the Dutch territory, only the material  from the region south of the Charles Louis- and Nassau- Mountains goes to the Batavian Society as planned. Due to a miscommunication, the rest of the material is given to other institutions.” 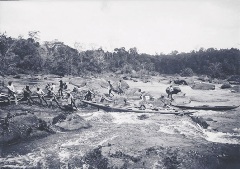 The final exploration is started in 1913 by a team of 400 men selected from both the Northern and Southern Detachments. Half the team consists of convicts.  This unit, led by Ludolph Doorman, explores the catchment area of the Maberamo, the longest river within Dutch New Guinea. Doorman makes use of the experiences of a previous military unit led by the KNIL officer and topographer, A. Franssen Herderschee.  This officer had unsuccessfully 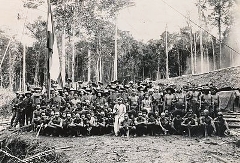 attempted to reach the snow peaked mountains of the Cartenz-Massief by way of the Maberamo River. However, in 1913 he manages to attain the goal he set himself as commander of the Third South New Guinea Expedition which climbed to the Wilhelmina Summit. They found a way through by approaching from the south coast. Franssen Herderschee  himself never recorded his experiences but the biologist August Adriaan Pulle did make a record of this 1912 to 1913 expedition

In 1915, when all the blank spots on the map have been successfully filled in, the reconnaissance and survey activities by the Military in Dutch New Guinea comes to an end. 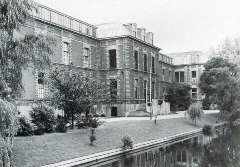 The eight year period of reconnaissance by the Military has been immensely valuable, even though it claimed 140 lives. A first result of the extensive  explorations is a detailed sketch map of Dutch New Guinea published in 1919. From 1907 to 1915, coastlines, the course of rivers, landscapes and mountain areas are recorded on numerous maps, unknown tribes are discovered and thousands of ethnographic artefacts are collected. However, the public is not really aware of these explorations as the results are 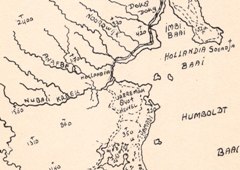 mainly published in Military Reports and in-house magazines. Nor are there any anecdotal travel stories by one or more  participants as is done by Hendrikus Albertus Lorentz for two other non-military expeditions around about the same time: The North New Guinea Expedition and The Second South New Guinea Expedition. Last but not least, the exploration of New Guinea by the Military Detachments has very much enriched the collection of  three ethnographic museums. In total, 8850 objects have found their way to museums in Jakarta, Leiden and Amsterdam.

-  De uitkomsten der verrichtingen van de militaire exploratie in Nederlandsch-Nieuw-Guinea.,1916, Batavia, G. Kolff & Co in pdf-format.
- Theme Page about The First Dutch Expedition and about The Centenary Celebrations of Hollandia (Now Jayapura).
_ PACE is in possession of maps of the military exploration of New Guinea. Read the news item about this gift.
-Artefacts brought to the Netherlands, can be found in the Tropical Museum in Amsterdam, the Army Museum in Delft and in the KITLV (Royal Institute of Southeast Asian and Caribbean Studies) in Leiden.