Similarities and differences among Mountain Papuans 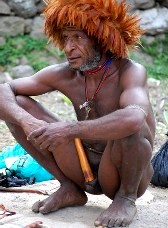 A comparison between  lifestyle of Papuans living in mountain areas has shown that there are many similarities. One such similarity is that they lived in groups consisting of patrilineal clans. Their leaders were men who needed to prove themselves time and again. Fights and wars between groups of Mountain Papuans were frequent. These usually took place between people who belonged to the same ethnic group.
Differences on the other hand, occurred in performing rituals and establishing trade contacts.

A useful insight into their lifestyles can be obtained by comparing three different groups of mountain tribes: The Dani, the Eipo and the Damal.

1. Mountain Papuans
2. Differences between ethnic groups
3. The Dani of the Grand Valley
4. The Eipo
5. The Damal
6. Links
7. Sources

Mountain Papuans living in the Central Plateau were farmers, who tended to grow the same kind of crops. The main crop was the sweet potato or batat of which the Papuans not only ate the tuber but 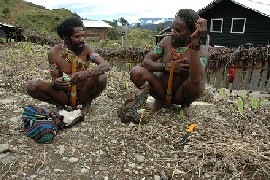 There were also large differences between the various ethnic groups. For example, the numbers of 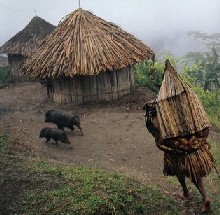 people participating in festivals, performing of rituals, fighting strategies, and the geographic scope of trade relations differed widely. In some ethnic groups - but not all - the ties were concentrated, that is: there was a preference for marriages between members of two neighbouring clans. Leadership criteria and the way a leader had to prove himself, also varied from one tribal group to the next. It could involve, among other things, courage in combat, organizational merit, demonstrated proficiency in economic transactions, or a prominent role in religious ritual innovation.
As for economic production, some groups depended almost exclusively on agriculture, while others obtained their supplies through hunting and gathering.
The intensity of farming methods used also varied greatly. A method that drew the immediate attention of Europeans, was one which required a high degree of water management. However, this method really only occurred in the Panai Region and  in the Grand Valley.

3.The Dani of the Grand Valley 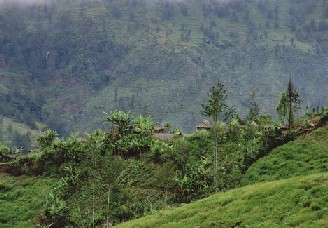 The area where the Dani lived was one continuous stroke of land, consisting of the valley floor, the surrounding hills and various gullies branching off. The gardens in the valley comprised their main source of income. They had developed a well balanced agricultural system which ensured that water could be channelled away when there was too much and retained when needed. Despite the high population density, there was plenty of food harvested for everyone. The abundant  harvest was partially used for feeding the pigs and it allowed the Dani of the Grand Valley to provide their ancestors with a descent amount of pork.
Their ancestor worship often led to warfare. The Dani of the Grand Valley were organized into war factions, some of which could consist of up to a thousand people. These factions were subdivided into a number of networks built up out of several related (by marriage) clans. There was a preference for marrying into clans that were already related. Such confederations or networks also existed among the West-Dani, the Damal and  probably among the Yani as well (G. Koch, 1984). Among other ethnic groups in the  mountains, the marriage ties were spread out over a larger number of clans and were not so concentrated in one area.
The warfare occurred mainly between confederations which belonged to different war factions. War was 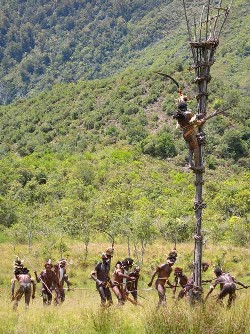 all about avenging your enemy by killing one or more of them, which (according to the Dani) was a command from the ancestors. If a confederation failed to succeed, it would be followed by the utmost frustration and fear that the support of their ancestors would be lost. If they did succeed, it was followed by lengthy and exuberant dancing to celebrate their victory.
The Grand Valley Dani Leaders acquired status on the basis of how they fared in war and the conducting of ceremonies. For the Dani of the Grand Valley, social life was very ritualised. Especially ancestor worship generated rituals. They were very attached to their adat. It took many years of tough measures by the colonial authorities to get the Dani to stop their tribal warfare. Attempts to convert them to Christianity, had very little success right up into the nineties. The Dani of the Grand Valley continued to be proud to their way of life. As one of them put it to Leslie Butt: “We are tremendously rich. We are strong and proud. The newcomers are jealous. They are not as big and tall as we are and they covet our riches.” 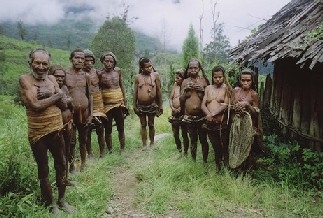 The Eipo lived in an elongated gully of the Eastern Mountains. Compared to the Dani they were a much smaller ethnic group. When German researchers went there in 1974, their living grounds extended some 15 km at the most along the Eipo River and reached an altitude of about 2200 metres. The widest section, according to Heeschen(1990) was only 2,5 km. This area was surrounded by uninhabited  forests. Heeschen estimated  the number of people speaking the Eipomek Dialect to be around 400. They lived together in groups of no more than about 200 people.
The Eipo lived in isolation on the upper reaches of the Eipo River and their habitat bordered on 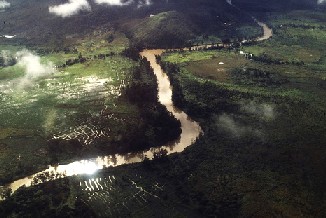 uninhabited mountain range. This isolation appeared to be of their own choice. They lived away from the trade routes of the Central Highlands. Trade contacts with other mountain tribes were infrequent.
The most significant treasure  for the Eipo consisted of sacred artefacts which refer back to the  original creation of their culture and society. These sacred artefacts, which were carefully stored in the special houses of the men, derived their significance from ancestor worship among the Eipo. They ascribed their creation to the first ancestors of their tribe. As was the case among the Dani, ritual was also 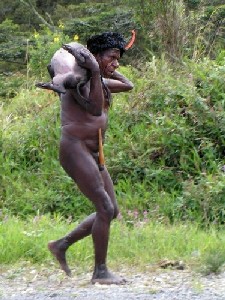 very important to Eipo daily life .  A number of these rituals were passed down from their ancestors. Eipo riches are fewer and their numbers of pigs smaller than the Dani. Eipo marriages came about through reciprocal exchange of sisters. ‘bride service’ also occurred.
The Eipo constructed drained fields on the flat land available to them. There was not a lot of flat land and there were many steep slopes, which were well suited to growing sweet potatoes. Erosion, however, was a serious problem. The Eipo managed to grow food on fields on slopes at a 40º gradient or more. Even though the Eipo had fields in production within different ecological zones at any one time, they were still worried about crop failure. By presenting food as gifts to surrounding tribes, they knew they could request food in times of need.
The Eipo showed a remarkable modesty. Their material possessions were few and they never set out to intimidate one 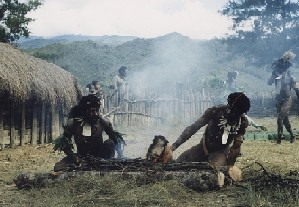 another with the giving of gifts. Heerschen claims that the mutual visits of the inhabitants of two villages and smaller settlements were highlights in the life of the Eipo. These visits did involve gifting but one made sure that the hosts only received an amount which they would be able to reciprocate in equal measure. Like the Dani, the Eipo had leaders who were the ‘guardians of tradition’ and who played an important role in gift giving, group ventures and formal visits to other communities. 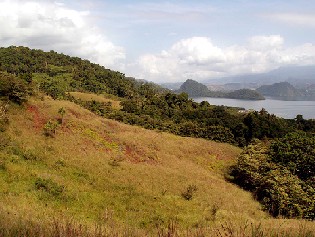 The Damal lived across several different valleys and as such did not have one continuous habitat.  Some of them became a known as the Amung, or more commonly still as the Amungme. The Amungme lived in the gullies on the  steep southern slope of the Central Plateau. The main Damal tribes, who  lived on the mountains of the Central plateau itself, shared their habitat with other ethnic groups. In the Upper Ilaga Valley, They had to allow in West Dani immigrants. This happened in the course of the previous century. Further towards the northwest the Damal live along gullies of the lower reaches along the Ilaga Valley, called the Doindogga and the Kemandoga. In the case of these two particular gullies, it would appear that the Damal were the ones to be the immigrants. We know about the Dama people thanks to the work of three ethnographers: the missionary John Ellenberger, Alice Gibbons (the wife of a missionary), and the anthropologist Carolyn Cook. As is the Case for the Dani of the Grand Valley, the Damal use binary organisation as a way to arrange the social structure of their society. They had a layout in which the group was divided into two halves. Their socio-political communities are organized around two clans , connected over time through reciprocal marriage arrangements.

In other respects, their lifestyle was completely different from that of the Grand Valley Dani. The 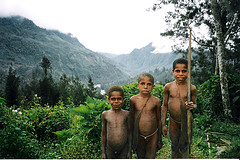 Amugme, for example, obtain their food by foraging in the jungle. On the one hand they simply collect what is there, on the other hand they set out to make the foraging as productive as possible. In addition they had gardens along the steep slopes of the gullies they lived in. All three ethnographers listed above, reported that the Damal and the Amungme preferred keladi to sweet potatoes. The Ilaga described themselves as the Keladi people, even though their farming method, which they had taken copied from the West Dani, was one suited to growing sweet potatoes. Prior to this, they had used irrigation in order to grow enough Keladi.

The biggest difference between the Grand Valley Dani, and the Eipo as compared to the various Damal 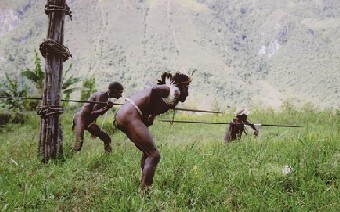 tribes, is that the Damal and the Amungme were not satisfied with their lifestyle. The Dermal had expectations of a millenary nature and they tried to realise these  through rituals and millenary movements. Ellenberger established that the Damal embarked on several millenary movements in the course of the twentieth century. The Damal of the Ilaga Valley (and the West Dani) converted en masse to Christianity during the fifties, shortly after the missionaries settled in the region. This conversion was steeped in beliefs around the concept of salvation.